Whipping Up a Storm in the Markets

BRB Bottomline: Storms are generally looked at in a negative-light, and for good reason. But from a purely economic perspective, is there a chance that we exaggerate their impact? Is there anyone who actually benefits from large-scale disasters? As counter-intuitive as it seems, there is actually a term for this: creative destruction. Does this theory hold up when analyzing recent storms, and what are its implications?

September 2018 saw the Carolinas become the newest additions to an ever-expanding list of states struck by a large scale natural disaster. Hurricane Florence brought with it record rainfalls, immense flooding and deadly winds, tracking an all-too-familiar trail of destruction: fifty plus deaths, an estimated 0.2% percent drop in economic output and according to Moody’s estimates, around $20 billion in damages to homes, businesses and public spaces. As the effects of the storm slowly dissipate, the tedious process of rebuilding begins, and with it returns the age-old question: “What is the short-run and long-run impact of such natural disasters?”

Not As Deadly As It seems?

What exactly was the demographic that was hit by Hurricane Florence? It was largely centered in coastal regions in the South-East, around the Carolinas and parts of Virginia and Georgia, home to 5-10% of the US population. While the estimated damages are no-doubt worrisome, they are not as bad as they could have been. The affected region accounts for only 1.1% of the country’s GDP, and 1.4% of the total employed population.

Carolina’s extensive aerospace manufacturing sector is likely to take a hit as well, but as mentioned above, it is estimated to shave off only a tenth off the overall GDP growth rate. Moreover, while there was energy infrastructure in Florence’s path, the effects on energy prices in the US will be diminutive at best, unlike Hurricane Harvey which ran amok on the energy supply chain and brought oil refining capacity to 30%. 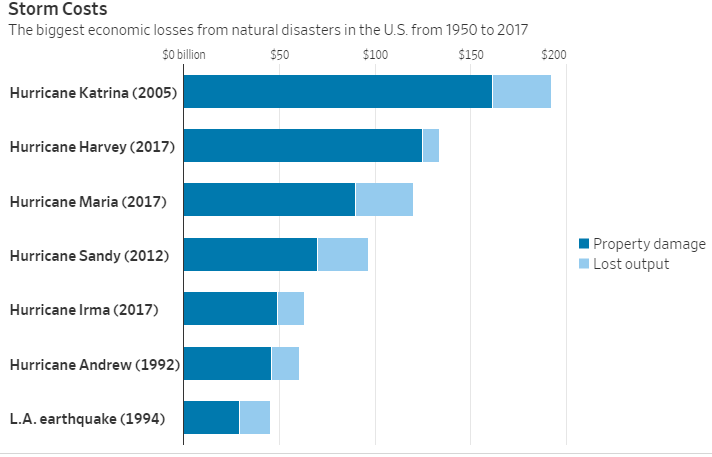 Even stronger cyclones like Katrina, while extremely devastating in the short run, do not seem to leave an equally indelible mark on the broader economy in the long run. Per the WSJ, Katrina’s impact on wages, employment, and per capita income was mostly transient, and that within a few years, Katrina victims’ incomes fully recovered and even surpassed that of controls from similar cities that were unaffected by the storm.” The lack of economic strength in the areas affected by Florence (versus Katrina and Harvey) allows for some justifiable optimism about the potential damages the hurricane leaves in its wake. However, does this mean every natural disaster is a “temporary inconvenience” for the economy?

Natural Disasters such as hurricanes have always been a topic of debate for economists – while the intuitive conclusion to draw is that storms are unequivocally destructive to a country’s growth, there are several that subscribe to the more unintuitive path – natural disasters do not tangibly impact the economy in the long run and in some cases, can lead to a positive shift as well.

This viewpoint is rooted in the multiplier effect: as rebuilding begins, investments are directed towards constructing new infrastructure, creating substantial demand centered around the secondary sector. According to the hypothesis, this demand not only stimulates growth and pulls the GDP of the country up, but also helps replace any depreciated assets eating away at the economy. Moreover, economists from this school of thought also cite the adaptability of industries during supply shocks: if manufacturers can’t source raw materials from disaster-hit regions, they can simply switch to one of several alternatives. These viewpoints are illustrated by the “Creative destruction” and “Build back better” trend lines in the chart below. 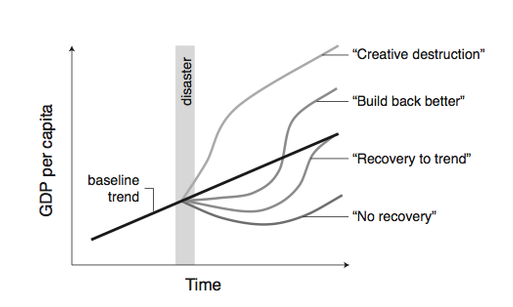 Is it time to throw fiscal and supply-side policy out the window? If you want economic growth, should you just wait for the next disaster? This opinion is exactly what Berkeley and Columbia professors Solomon. M. Hsiang and Amir S. Jina debunk. 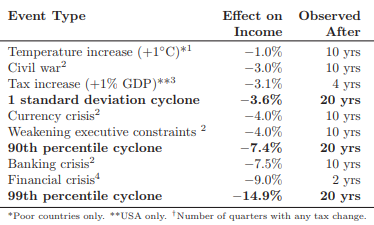 In a paper titled “The Causal Effect of Environmental Catastrophe on Long-Run Economic Growth,” the two professors analyzed over 6000 recorded cyclones, typhoons and hurricanes, which are collectively called tropical cyclones, across the world from 1950 to 2008 and tracked their long run (defined by them as a period of twenty years) effects of such a disaster on a country’s growth rate. To circumvent incomplete and low-quality self-reported disaster statistics, the researchers constructed their own index of storm exposure by reverse-engineering the cyclones through a combination of ground, ship, aerial, and satellite-based meteorological observations. Finally, they exploited the random nature of these tropical cyclones, while accounting for other variables such as geographical differences, differences in market openness in the countries and so forth (17), they established a significant negative causal relationship between the natural disasters and GDP growth of a country.

In their words, a mediocre storm is comparable to “a tax increase equal to one percent of GDP, a currency crisis, or a political crisis in which executive constraints are weakened.” A not-so-common storm (for example, Katrina), the damage is an order of magnitude worse, uncannily similar to what one would expect from a major financial crisis – ” The very worst storms—the top percentile—”have losses that are larger and endure longer than any of those previously studied shocks.” They estimate the total losses of the studied cyclones to be $9.7 trillion, more than 10% of the world GDP.

The table presents some profound implications: firstly, unlike what the “creative destruction” model proposes, natural disasters mean disaster ensues for the economy as well, one that the markets never really recover from. Secondly, in many cases, the repercussions rival those of civil wars, currency crises, and financial crises. The difference? Storms are far more frequent, which means that these consequences repeatedly stack up and can set countries (especially developing ones) several years back in terms of production. In coastal areas that witness strong cyclones annually or bi-annually, this means that they are perennially stuck in an atmosphere identical to large-scale economic catastrophes.

The paper does paint a distinctly somber picture; however, it would be wrong to completely disavow all facets of the “Build back better” and “Creative destruction” theories. The long-run GDP growth argument does fall short, but it is not wrong to say that in the short-term, it is often the case that the common man loses, while large corporations’ benefit from the subsequent boost in demand. Take for example the automobile industry – after Harvey, it grew at a rate of 16.6%, versus a 12.7% growth rate in the immediate next quarter.

All said and done, there is an important distinction that must be drawn between economic growth and development: increased growth in certain companies does not always trickle down to a better standard of living for the general population – it is often the average citizens that bear the brunt of natural disasters. The obvious next question: should companies benefiting from increased revenues due to natural disasters play a bigger role in assisting the severely affected?