The Rules That Steer the U.S. Economy

The U.S. economy is one of the largest economies in the world.  As the top 1% find themselves greatly benefiting from the economic growth through rapidly increasing incomes over the last 30 years, the middle and lower classes continue facing stagnating wages. Is our current economic system built only for the elite?  What new laws can stop fueling the trend of income inequality and foster an economic system built for all?

In 1980, the U.S. GDP reached $2.9 trillion; in 2020 it reached $20.49 trillion. GDP has grown rapidly, yet the minimum wage for a typical worker has not increased over time. In 1978, a typical worker made $48,302 and the average person in the top 1% made $393,682. In 2010, a typical worker made $33,751 and the average person at the top 1% made about $1.1 Million per year.  Figure One demonstrates that throughout the last ten years, the income of the top 5% earners in America has increased faster than the incomes of all other families. Given that income inequality has continued to grow over the years, it becomes questionable whether or not America’s economic system, capitalism, is organized for the people. By extension, is capitalism a good and moral system? 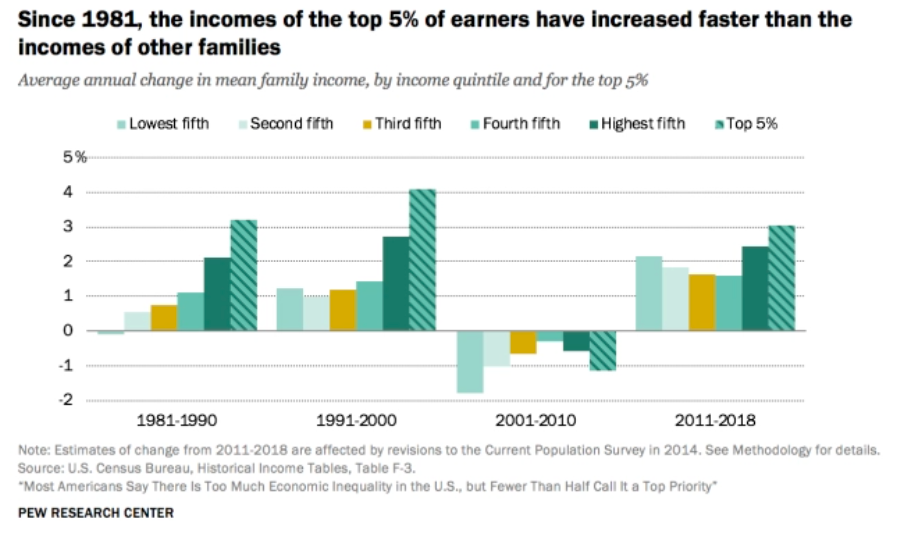 American economist and professor Robert Reich explains that “there is nothing inherent in an economic system that makes it immoral or moral […] it depends on how it is organized. If it is organized for people, it can be a good […] moral system.” In America’s economic system, the government creates the rules (laws) of the game. By analyzing current laws and measuring their economic effect on individuals all over America, it becomes more apparent whether or not America’s economic system is organized for the people, and also reveals if capitalism is a good and moral system.

PART ONE: EXPLORING THE U.S. ECONOMY 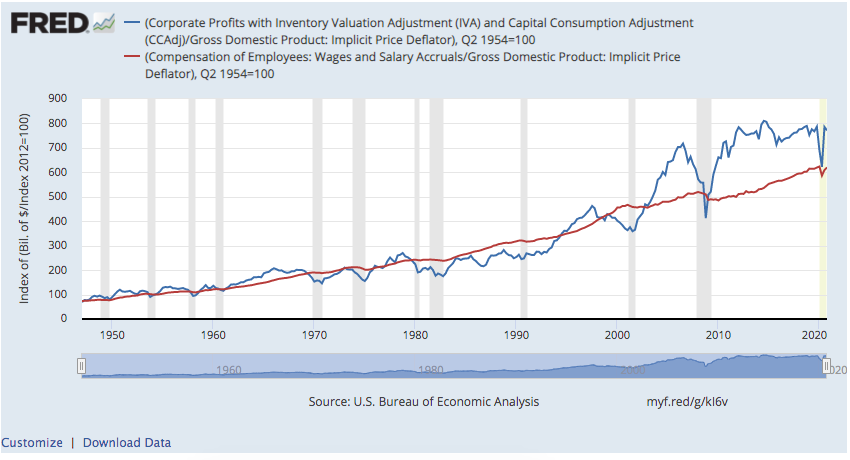 Similar to the positive growth that companies have experienced, Figure Three indicates that income concentration at the top 1% has also risen in the last ten years. Even though the top 1% benefit most from the U.S. economic prosperity, they are not the group that fuels economic growth. Professor Reich interviewed entrepreneur and venture capitalist Nick Hanauer. Hanauer explained that the economy is driven by the middle class because the richest 1% do not invest in the economy; the 1% invest their money in funds and projects with the expectation of earning a larger return for themselves. “Most return created is not creating social utility, only a return for me,” asserts Hanauer. 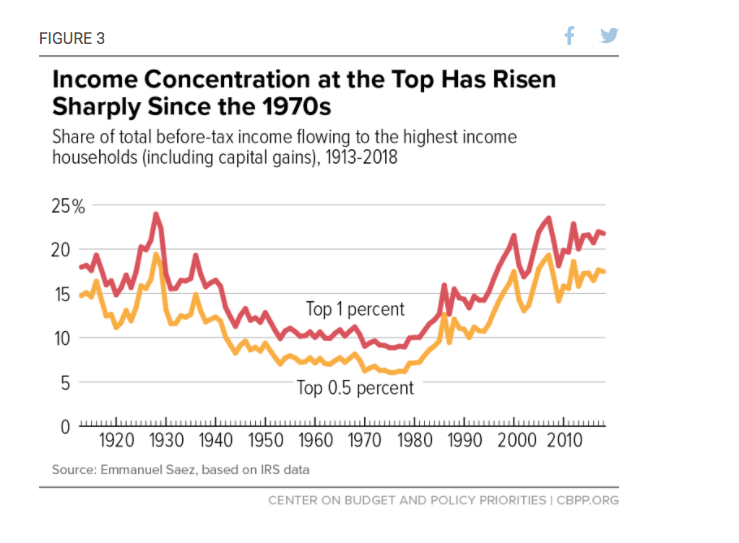 Seventy percent of the US economy is dependent on the spending of the middle class, thus they fuel the economy. However,  expenses continue increasing for the middle and poor class in America, wages remain stagnant, and disposable income decreases, as demonstrated in Figure Four.  The figure indicates that Americans, both in the middle and lower classes, need more income to survive and help the economy prosper. Given the income inequality between the top 1% and the “average” person, it becomes more apparent that the American economy is not organized for the people. What rules have created such results? In short, laws allowing corporate donations to political campaigns. 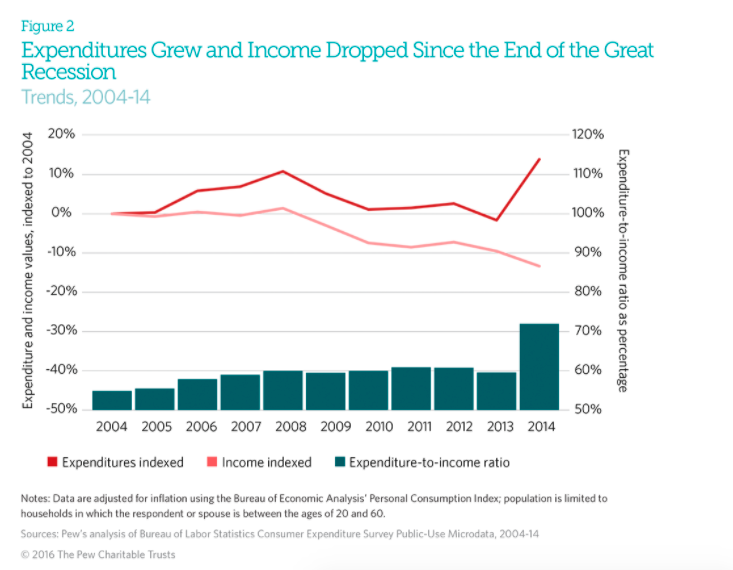 In 1971, Lewis Powell wrote to the U.S Chamber of Commerce the following memo “…national business leaders. The American economic system is under broad attack […] businesses must learn the lesson that political power is necessary; that such power must be assiduously cultivated … and that when necessary, it must be used aggressively and with determination.” Powell’s memo was a force that influenced businesses to find ways in which they could influence the government and make sure they enacted laws that would satisfy their needs.

In 2010, businesses got the right to spend on political campaigns. During the Citizens United Case (2010), the Supreme Court ruled that corporations have the same rights as citizens, therefore, giving them the right to donate unlimited contributions to political campaigns. The problem with such a ruling is that campaign contributions buy political candidates; once a candidate enters office, the companies ask candidates to speak on their behalf when voting and drafting bills.

Researchers at Princeton took the initiative to explore how much political power individuals have in comparison to large companies. The scholars discovered that if large corporations or wealthy individuals want a law passed, there’s a 60% chance it will pass. On the other hand, scholars found that there is only a 30% chance that a bill will pass if everyday individuals want the bill to pass. Figure Five illustrates examples of large corporations or business leaders who fund political campaigns; Figure Six illustrates the increase in political contributions over the years. 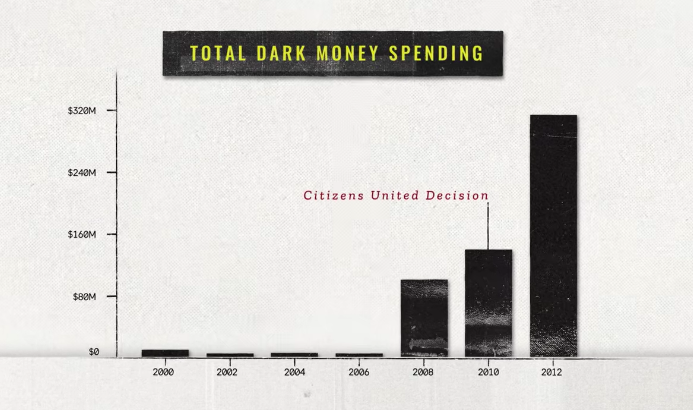 Politicians prioritize the needs of corporations at the expense of their constituents. As businesses earn more power, the necessary changes required for the well-being of the middle and lower classes are not prone to happen because according to Professor Reich, companies are not designed to make good jobs but to make profits.

So, if the rules that steer the American economy are not organized for the people, does that mean that corporations have won at the expense of the poor and middle classes? Well, there is still hope; in the early 1900s, President Roosevelt signed a law to prohibit political campaign donations from companies. Change can happen; it is a matter of exploring how to create it.

Elimination of political contributions can be a solution, but what other rules can be added or removed to make sure that the rules steering the U.S economy support the middle and lower classes? Addressing that large question can begin with an initial assessment of the restaurant and foodservice industry. The restaurant and foodservice industry employs individuals who earn $11.42 an hour, which is one of the lowest wages a person earns in the United States; low wages are a large problem within the restaurant industry.

PART TWO: A CLOSER LOOK AT THE RESTAURANT INDUSTRY

By reading news headlines, it becomes apparent that there is a unique feature about the restaurant industry; can that uniqueness help pass a law that creates positive change for the middle and lower class in America?

“Our company is committed to supporting the community.” A common phrase listed on almost all restaurant corporations’ philanthropic efforts webpage. Their efforts are impactful to someone’s life, but why do companies embark on such efforts when a large number of their employees are living in poverty?

Gautier and Pache explored why companies may engage in corporate philanthropy; they found three primary reasons. “[First,] corporate philanthropy [can be] a voluntary [selfless] expression of the firm’s commitment to the common good. Second…[it can be] community-oriented investment through which firms ensure their competitiveness while fostering their business environment… Third… giving [can be used as] a commercial tool [to maximize profits].” Do most companies in the restaurant and foodservice industry embark on philanthropic efforts to benefit the low and middle-class communities for the better, or is it used for profit maximization purposes?

The question presented will be explored through a case study in the state of Maine.  The Food Labor Research Center at UC Berkeley published a report in 2021. According to the report, “In Maine… 10.9% of the total Maine population (1,344,212) lives in poverty. There are at least 77,626 Maine workers who are currently employed and live under the poverty level. The foodservice sector is one of the largest employers in Maine, and it provides some of the lowest wages in the state.”

It is important to note that an increase in minimum wage could cause a decrease in employment opportunities, as demonstrated in Figure Seven. However, an interactive tool created by the Congressional Budget Office indicates that the amount of jobs lost after an increase in minimum wage depends on several factors including how fast wages increase and by how much they increase. This indicates that raising the minimum wage should not be a disqualified option because it causes job losses, rather it shows that the amount and implementation of wage increases needs to be strategically calculated by each state according to their state economy. 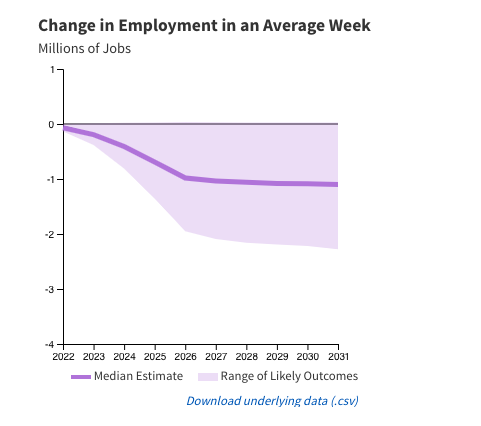 Now, it is time to analyze the effects of a company’s philanthropic efforts in Maine.

The McDonald’s corporation has a unique philanthropic program to support all communities in Maine. McDonald’s has 2 homes in Maine that welcome families who have children undergoing medical treatments. They have a third facility called the Family Room, a place where families can also stay if they have a child going through a medical treatment. They also offer grants to support nonprofits. In 2019, 555 families stayed at their houses, 1,250 families stayed in the family room, and they raised $295,000 in fundraising for charities. Their efforts create positive impacts on a select number of families, but such efforts do not generate the economic effect that an increase in minimum wages would create. The minimum wage fosters financial mobility for restaurant industry employees; it reduced state poverty levels by 53%.

McDonald’s is known to pay one of the lowest wages, and employees have spoken out about how hard it is to live on low wages paid by McDonald’s employers. So, even though Mcdonald’s is supporting families, nonprofits, and making a difference in someone’s life, Gautier and Pache’s research indicates that their efforts are either for-profit maximization or because of the benevolence of executives. Might McDonald’s executives act on behalf of benevolence? Well, the fact that the majority of their workers live in poverty and cannot afford necessities, indicates otherwise.

The point is not to stop philanthropic efforts, but to find rules that will motivate companies to generate the necessary change to make sure middle and low-income workers can have a better life and enjoy the prosperity of the U.S. economy with higher wages. The U.S. economy is one of the largest economies in the world, so there should be rules, laws, and systems that support the low and middle class of America, not just the elite. Professor Robert Reich explains that if an economic system is organized for people, it can be a good moral system. The current rules are causing stagnating wages and increasing expenses for the low and middle class; so it is time to start talking about new rules that can bring about a good and moral system for all people in the United States.

2021-07-19
Previous Post: The Economics of Airports and Privatization
Next Post: Biden’s Ambitious Climate Plan: What Does This Mean for the American Economy, Jobs, and Investment?