The Gaming Industry During COVID-19

2020 was an interesting year to say the least. The coronavirus pandemic forced people from all over the world to stay home through government lockdowns and quarantining. Several industries and small businesses were economically hampered as a result of this due to people’s inability to live their normal lives. However, an assuming winner of this pandemic was the gaming industry. Let’s jump into the reasons as to how and why it thrived during these uncertain times.

The History of the Industry

The video game industry dates back to 1952, when the first digitized version of Tic Tac Toe, named OXO, was released by a professor at the University of Cambridge. Since then, several different producers have entered and exited the market, and the industry has now grown to over a 100 billion dollars worldwide with almost half of the American population having access to some form of gaming console. However, the industry was reformed after the release of the XBOX 360, Playstation 3 and Nintendo Wii, which captured over 90% of the market share and have dominated ever since. Unfortunately, as the XBOX and Playstation started developing newer versions of their consoles, Nintendo was unable to keep up with Sony and Microsoft’s development and is now a negligible part of the market. For the past 10 years, XBOX and Playstation have been looking to innovate and differentiate their consoles in an attempt to form a monopoly in this industry. As of November 2020, these two gaming giants have captured 99.9% of the gaming console market.

As a consequence of the stay home restrictions, people were craving social interaction, and many turned to gaming as a way to engage with friends and family. The graph below shows that approximately 34% of American consumers tried a new video gaming service during the pandemic. Nintendo looked to make a revival into the industry with the launch of their “Nintendo Switch,” which was released in 2019 and regained hype during the COVID 19 pandemic. The new console was in such high demand that they ended up running out of stock as more aspiring gamers looked to purchase the console. The reasons for this increase can largely be attributed to the increased time spent at home. With social interaction in person being non-existent, people are naturally eager to stay in contact with friends, and to elevate the experience from a simple ‘catch up’ call, consumers have turned to gaming.

Moreover, there have been several psychological studies that investigate the addictive nature of gaming. Gaming triggers the release of dopamine, which reinforces behavior. Game developers design their games in a way to hook people in, and not only have them play for an hour or two, but have the consumers finishing their games and actively seeking more.

These studies are also very promising for the producers in the gaming industry as these new consumers that are being acquired during the pandemic are not temporary, and they are hoping to retain a large percentage of them.

The coronavirus pandemic created a new generation of gamers and has given the tech engrossed millennials another excuse to be glued to screens throughout the day. It’s only a matter of time before we start turning to our XBOX or Playstation when we need to be consoled. 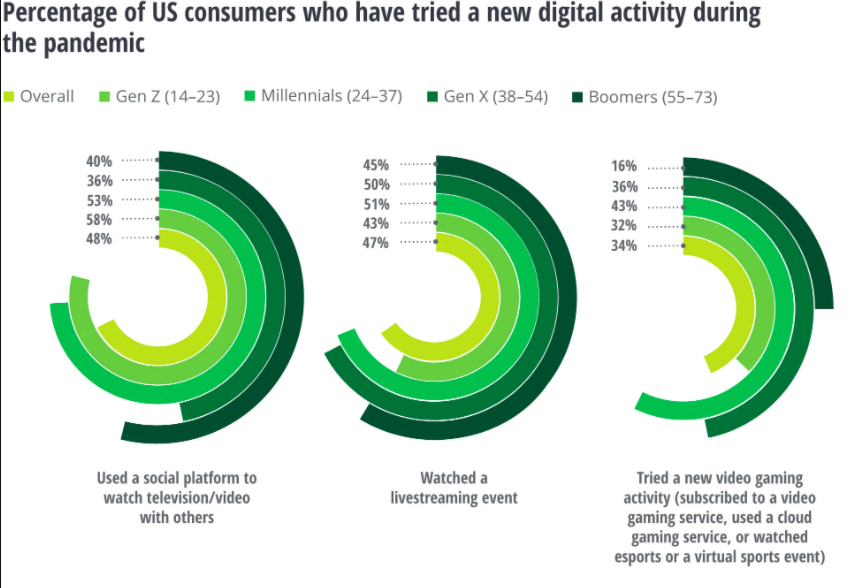 2021-03-07
Previous Post: The Rise of Ecommerce and the Fall of Retail
Next Post: Balancing Labor and Capital in the Private Tuition Market