BRB Bottomline: The current boom just became the longest on record. But where do we go from here? The Fed is trying something only once done successfully in history.

*Special Credits: I would like to thank Professor Brad Delong for helping me develop the intuition for the topic. The views published in this article are those of the author and quoted individuals and do not necessarily reflect the position or policy of the UC Berkeley Economics Department or faculty

This bull market is the longest on record by most definitions. Unemployment has fallen to levels not seen in five decades. With the most recent tax cuts, corporate earnings are looking rosier and rosier. The U.S. economy grew at an annualized rate of 4% in the second quarter, which, while in part due to recent tax cuts, are levels that haven’t been experienced since the tech boom.

But, all this strength brings with it other concerns—inflation and an overheated economy. In the effort to avoid and combat these risks, the Federal Reserve is raising interest rates and slowing down GDP growth to a positive but sustainable rate without plunging the economy into a recession. This ideal scenario is what economists call a “soft landing.”

A Soft Landing is the economic condition when an economy shifts from rapid growth periods to slower, even flattening growth periods,  while avoiding a recession. After a healthy cooling period, the economy is all set to pick up again. It is essentially a flattening of the business cycle. Mark Zandi, chief economist of Moody’s Analytics Inc., likens it to “landing in the fog on an aircraft carrier that’s in the middle of choppy seas.” 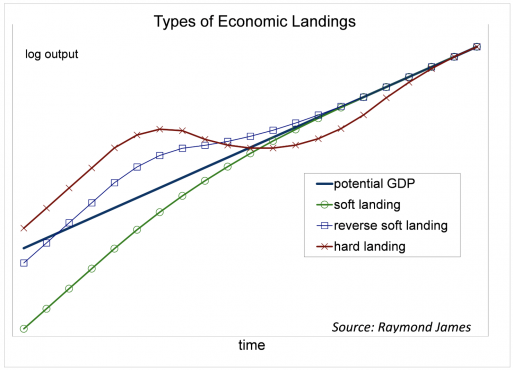 The term ‘soft landing’ actually comes from ‘70s pop culture influenced by the Space Race during the Cold War when some of the spacecrafts were successfully engineered to make soft landings. Ironically, the Federal Reserve never used the term, and the economy never made a soft landing. The Soft Landing of 1995 was an exception. Every other recession has come with a severity and rapidity that surprises capital markets and spurs widespread panic.

Lessons from the Only U.S. Soft Landing

In 1994-95, under the leadership of Alan Greenspan, the Federal Reserve (“the Fed”) was able to achieve its the only true soft landing. During that period, the Fed doubled interest rates to 6 percent and slowed the economy enough to prevent overheating, which eased inflationary pressure but not so much as to cause a big jump in unemployment. In his book, The Age of Turbulence, Greenspan says,

“Economic growth slowed throughout the year, to an annualized rate of less than 1 percent in the fourth quarter, when our metaphoric spacecraft gently touched down. In 1996, the economy picked back up again. By November, when President Clinton would win reelection, activity was expanding at a solid 4 percent rate.”

The Economy Rarely Engineers Its Own Soft Landing

Some economists favor this path. They hold the line that central bankers in the past have overreacted to inflation signs, depriving workers of the wage gains they would make in a tight labor market. You can imagine, as the economy picks up, shutting down the economy would deprive workers of wage gains that they worked hard to create. However, the Fed—in its efforts to maintain purchasing power by checking inflation—believes that  wages become inflationary if those wages increase significantly faster than the actual productivity that those workers are creating. When wages account for more than three-quarters of total production cost, the Fed believes it has enough evidence that says wages are increasing much faster than workers deserve, which means the prices for all goods are going to rise faster than desirable. The worry is that, as companies find it increasingly difficult to find workers, they’ll bid up wages, which could lead to higher consumer prices as companies seek to protect profits. The Fed wants to get ahead of the curve and increase interest rates to prevent the economy from reversing violently.

In his February testimony to Congress, current Fed Chairman Jerome Powell said that he “expect[s] that some continued strengthening in the labor market will [sic] take place without causing inflation.” However, he also informed Congress about his reason for gradually increasing rates:

“By continuing to gradually raise interest rates over time, we’re trying to balance those two things [inflation and unemployment] and achieve inflation moving up to target but also make sure the economy doesn’t overheat.”

Some economists even dismiss the concept of a soft landing. Their argument rests on the basis that we’ve only once seen a soft landing happen successfully. They think Greenspan got lucky in his handling of the economy in 1995.

“Soft landings are much more frequent in forecasts than in real life,” Mr. Meyer, a former Fed governor and now a chief forecaster at Macroeconomic Advisers said. “With a computer, I can give you a soft landing if you give me 10 or 20 runs. But in real life, you only have one run.”

Achieving a soft landing today would not only mean slowing growth but also nudging up unemployment. In 1995, when Greenspan achieved a soft landing, a rise in rates corresponded with an increase in unemployment. However, the cost of higher unemployment outweighed the potential cost of a recession.

Greenspan tried the same thing in in 2001, but the dot-com boom ended in recession. The Fed tried doing the same thing in 2008, but failed again. Some argue that conditions today are different. The two recessions that precede our current situation were predicated on the speculation of internet stocks and residential real estate, which were pockets of avarice that were spurred by drastic technological and public policy change. These conditions brought with them unique risks.

This time, concerns about overheating focus on financial assets across sectors around the globe, especially in risky corporate bonds. President Trump has stoked up the U.S. economy with tax cuts and higher spending just as Powell & Co. are trying to slow it down. Economists are finding it increasingly difficult to predict how an increasing reliance on monetary policy to stimulate recessionary periods and ameliorate inflationary periods will have on the impact of the next downturn, especially if fiscal policy is actively emptying its bullets on the opposite inflationary agenda.

The Fed is being proactive in trying to engineer a soft landing. Since we haven’t seen enough evidence on the outcome of such an approach, and every time, the conditions have been different, economists will continue to debate on the merits of the current monetary policy. If successful, a soft landing is the ideal scenario. However, even one misstep could have far reaching effects on the markets and the economy.