The Housing Shuffle During the Pandemic

Over the past few years, a steady housing shuffle has taken place. People are fleeing large urban cities for smaller suburban areas due to multiple factors. This article takes a dive into the housing market and its effect on students.

A recent college graduate carries $100k in student loans. A parent supporting a family of four struggles to pay their next bill, after getting laid off. Thousands of individuals face similar circumstances, no longer able to afford to live in the hubs of extreme housing prices, cities like San Francisco, Los Angeles, and New York City (NYC). Many must flee these large, urban cities for less crowded, suburban areas. Thus, the housing shuffle begins.

Before the shift out of urban megacities began to unfold, Los Angeles faced a 0.3% annual population growth rate for the majority of the 21st century. In 2019, Los Angeles saw its first decrease in population in the city’s history. Similarly, San Francisco’s population growth rate turned negative last year, although this had been quite noticeable; their growth rates had stalled for the past decade. The case for NYC is noticeably bleaker. Since 2015, the median home price in NYC has appreciated by roughly 28.2%. In the second quarter of 2020, NYC’s median sales price decreased by 13% and pending sales were down 35.7%. Within these major markets which have long been the gold standard of housing, we’re seeing demand shift out of these highly valued areas.

Whether you realized it or not, the housing shuffle has already been taking place over the past few years. However, the unforeseen coronavirus pandemic only expedited the inevitable, forcing the hand of those on the fence about moving out of these urban sprawls. When the pandemic first hit, the entire housing market suffered tremendously due to rising uncertainties. But as the real estate market slowly recovered in May, home searches in suburban zip codes jumped 13%, doubling the pace of growth in urban areas. At this point, the resurgence of the housing shuffle was in full effect. 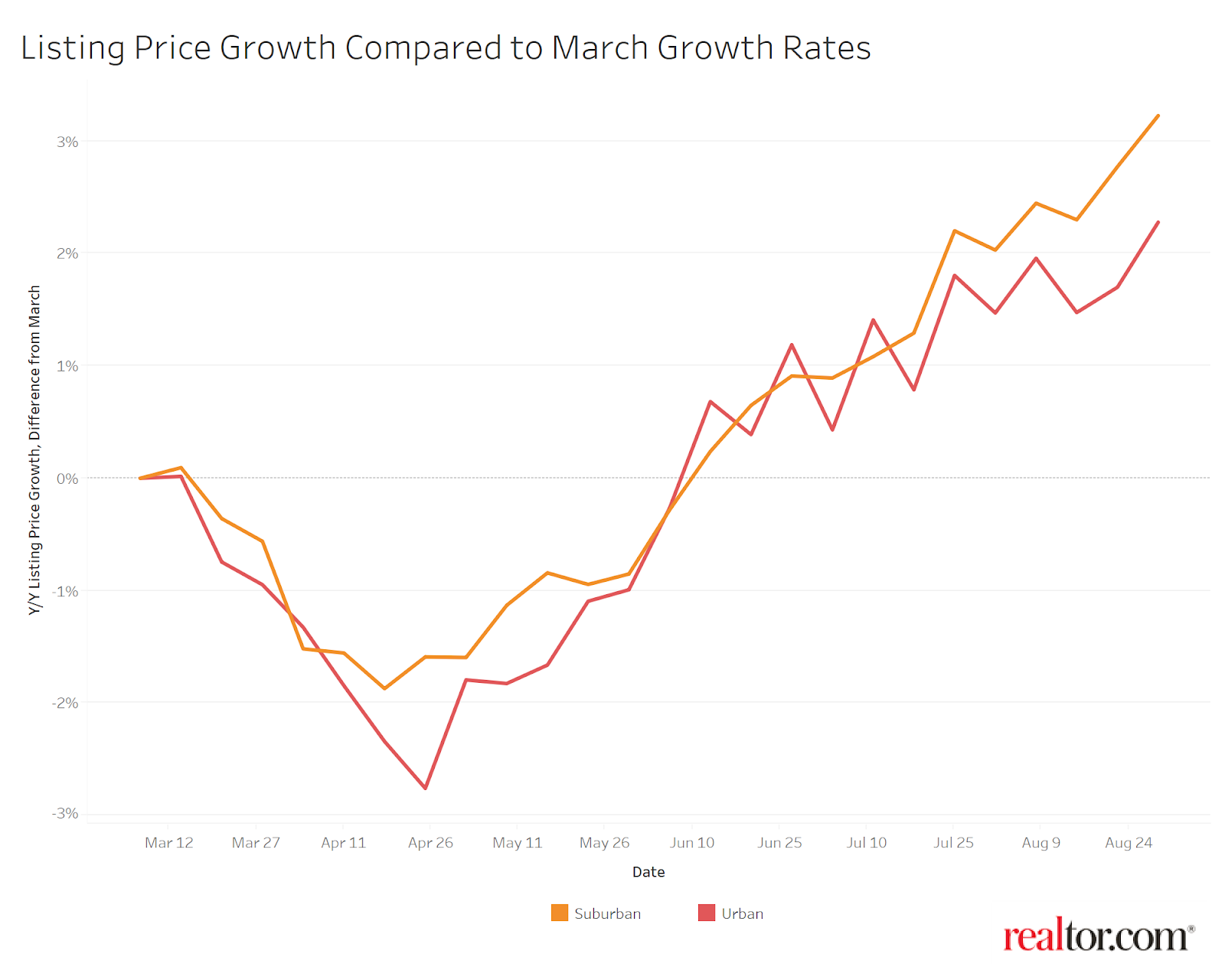 Currently, home inventory in suburbs is down 41.2% year over year compared to 34% in urban areas. This change suggests that home demand is outpacing supply at an unsustainable rate in suburban areas. The home inventory divide is even more evident when juxtaposing urban and suburban inventory in the 10 largest metros in the U.S. Urban inventory is witnessing declines of 13.4% year-over-year, whereas suburban inventory is declining by 40.2%. Within these metros, suburban homes are spending 16.2% less time on the market compared to 2019. All this goes to show the ever-increasing demand for living in the suburbs.

Now there are many selling points that can entice someone to move. However, listed below are some of the most compelling reasons for one to relocate.

The greatest factor in deciding where to live is cost. Suburban areas pull buyers away from metropolitan areas with their low mortgage payments. In addition to savings from lower property taxes, many also benefit from a lowered income tax. In California, new proposed income taxes like Assembly Bill 1253 would increase the tax percentage for higher-income residents from 13.3% to 16.8%. These taxes have spurred California residents (including Hollywood celebrities) to move. Nearly 44% of six-figure earners in NYC have considered moving out in the past four months, with a majority citing cost as the biggest factor. The combination of high property taxes and income taxes accelerates the mass migration out of mega-cities.

In the midst of the pandemic, remote working has alleviated a blow for workers. Traditionally, workers reside in large urban hubs in order to accommodate their job location. Now, Americans can finally express their preferences for where they want to live, rather than where they have to live. Remote working has also become the preferred work style for employers and employees. Working from home results in higher productivity and more flexibility, while saving companies a fortune from the real estate costs of renting a workspace. Moreover, remote working has the potential to become permanent even after the pandemic dissipates. Many companies extended their remote work plans through next year, including Square and Twitter who allowed their employees to work from home permanently. A transition towards a work from home setting is sparking a suburban boom and we are only in the beginning stages of this shift.

People tend to live in areas with surplus job opportunities and convenient public transportation. With these factors in the rearview, customer preferences have now emerged in the driver’s seat. People are expressing their desires for a more comfortable and larger living space. The creation of the work from home option pushed people to seek the cheaper alternative: suburbs. Nearly a third of Americans have considered moving into a larger home with a dedicated office space. With the pandemic, the number of people seeking freer living conditions without the hecticness and nonstop action of cities like Los Angeles and NYC has skyrocketed.

People often say that living in a suburban area leads to a longer life expectancy. Although there are many exogenous factors, the glaring health differences in overcrowded areas cannot be ignored. Los Angeles is suffering its worst smog pollution in over 30 years. Lower population density areas equate to less traffic and consequently cleaner air quality and better bill of health. It’s only fair to mention the restrictions of the pandemic as the country sets new highs every day. Recent spikes in large cities contribute to the mass exodus out of megacities. Suburban areas face fewer infections and consequently fewer regulations, a large incentive for those craving a sense of normality. The mass exodus has also ushered in record levels of crime. Compared to the previous year, homicides and burglaries in New York City have increased by 29% and 43%, respectively. In a time of civil unrest, it is no surprise that many are seeking peace by fleeing areas with high crime rates.

Housing in the Bay Area

Because of the close proximity and relevance that the Bay Area shares in this housing shuffle, it’s only right to look closer into the housing that will affect Cal students. Although the housing shuffle has gradually taken place in the Bay Area, the pandemic certainly exacerbated the situation. Specifically, San Francisco’s sharp declines in public transportation usage, office vacancies and sales tax collection suggests a migration out of the city. Sales tax revenue decreased by 43% in San Francisco, suggesting that people have already fled the city in large numbers. A September report revealed that median rent prices for studios in the Bay Area dropped 31% year-over-year, painting the picture that landlords are struggling to find occupants.

Inhabiting a majority of the nation’s tech companies, the Bay Area was the first to feel the effects of the work-from-home transition. Before the pandemic, employees were willing to pay absurdly high rents to live closer to work.,Tech companies were some of the first to announce extended remote work policies, stirring more long-term concerns for the city. These effects are already coming to fruition as San Francisco ranked 4th in cities that lost the most residents. Ultimately, time will tell and show the impacts of the migration out of urban megacities, including San Francisco. 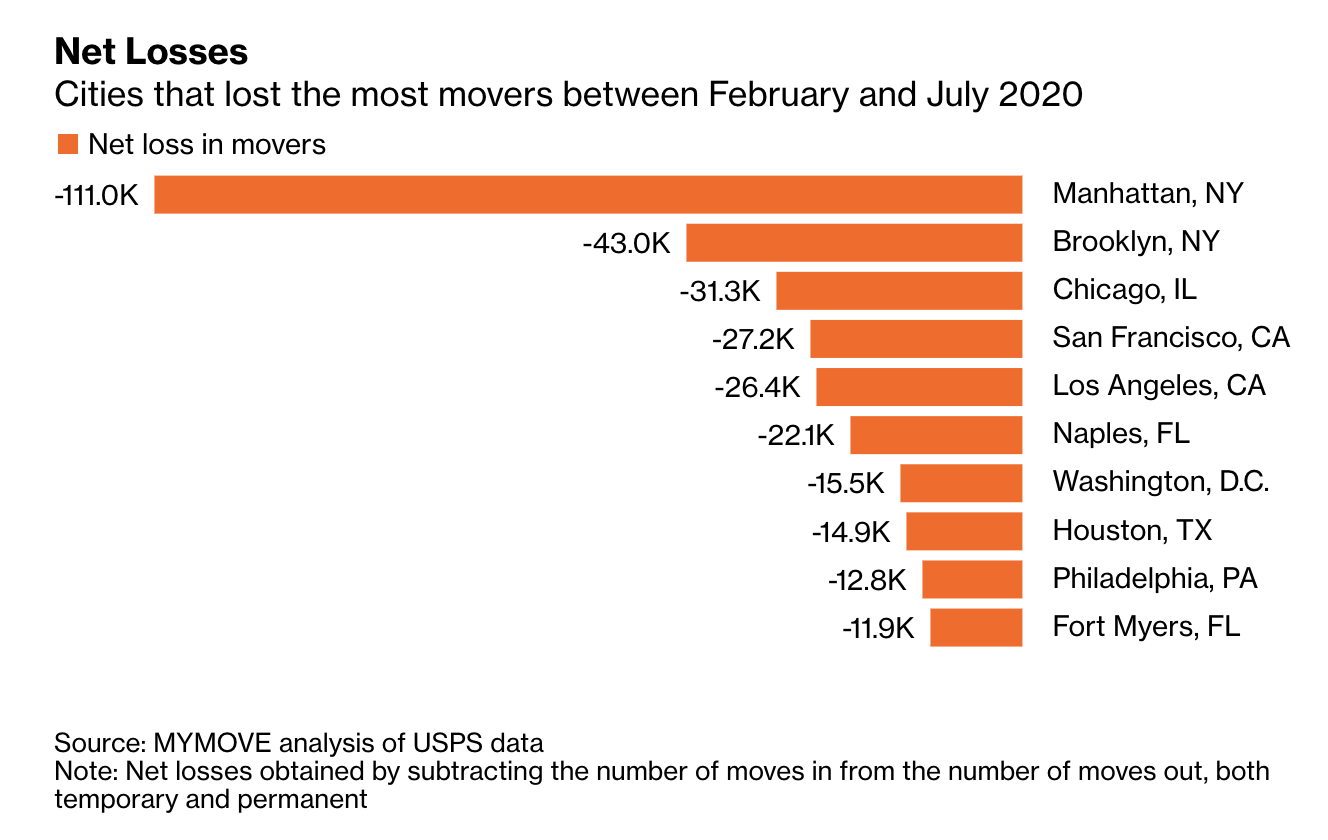 Though supposed rent decreases are taking place in the Bay Area, my skepticism led me to interview two Cal students to see how the pandemic affected their housing situations. Here is what they had to say.

Sophomore Rahul Mohankumar, Orange County native, made the decision to stay home for the semester: “The extreme housing prices in the Bay Area have had a tremendous impact on my current and future housing plans. Financially, it did not make sense for me to head back this semester with school being online. Our housing contract has changed from one year to six months and we’re saving 15% from the original price which is better than nothing. After graduation, I’m planning on living in a cheaper city like Oakland to escape the high cost of living in San Francisco.”

Junior Young Moon, also from Orange County, had no choice but to continue with his lease: “Our current housing contract decreased by 20%, but we had no leverage in canceling our contract. The landlords didn’t budge and now we’re stuck with living in the apartment for the entire year. However, cost has not been a big deterrent in where I choose to live after graduation. The idea of living in an urban megacity like New York or San Francisco still heavily appeals to me. ”

From these anecdotes, it’s clear that Cal students had fairly different experiences with housing. What we have yet to see is how this will affect housing contracts going forward and the long term effects of the pandemic. With 18-29 year-olds making up the most movers during the pandemic, recent college graduates will ultimately determine what the future of housing looks like.

Moving isn’t for Everyone

Now for those that are considering moving, it’s important to remember that it isn’t for everyone, even if you believe you identify with some of the previously mentioned points. One must gauge their individual situation before deciding to make this major decision.

If cost is the reason for leaving, research your company’s policy on relocating to lower-cost areas. Facebook and Microsoft have stated that they may lower the salaries of employees who choose to move; the pay cut can push upwards of 15%. Know that you may still be charged for taxes if your company is located in a high-tax state, if you’re leaving for a low-tax state. Other factors to consider are transportation costs, relocation costs, and furniture costs.

Above all else, understand the lifestyle change. Financial well-being is important but irrelevant if you’re uncomfortable moving to a suburban neighborhood. The short-term financial burdens from living in a mega-city do not outweigh a lifetime of unhappiness in the suburbs. With any life-changing decision, take the time to thoroughly review your options.

Choosing to leave your home is never an easy decision. But in some circumstances, that may be the best option. Factors like cost, remote work, and safety, are all valid reasons to relocate into cheaper, less populated suburbs. Before moving, it’s instrumental to conduct research on your individual situation to avoid a costly mistake. In these uncertain times, it may or may not be the right choice at this stage in your life. Whatever the case, be confident in your decision but don’t let it be your end-all be-all!

2021-02-09
Previous Post: Impact Investing: A form of “Guilt Capital” or a quest for Real Returns?
Next Post: The Streaming Wars