The Cheap Money Exodus: Tapering and the Economy Ahead

Tapering – the end of quantitative easing – has finally arrived, bringing an epilogue to the era of cheap money. How will tapering impact the economy, and what does it mean for the common public?

On November 3rd, 2021, the Federal Open Market Committee (FOMC) announced a well-anticipated yet nevertheless game-changing policy change. Tapering, the eventual end of federal quantitative easing, will officially begin in the upcoming weeks. Upon the release of this information, breaking news reports flared up across various new agencies, volatile index movements appeared in the stock market, and incessant voices of concern and speculation began flowing among business owners and investors alike.

What is tapering, and how is its deployment so influential to financial systems? In this article, we set out to explore the mechanism of tapering, its economic implications, as well as what it holds for the individual investor.

The Journey to Tapering

In its essence, tapering is the reduction of Quantitative Easing (QE), a monetary policy set out by the Federal Reserve (hereby referred to as “the Fed”) to alleviate financial crises. To better understand this process and its importance, we now take a closer look at how quantitative easing works.

During times of extraordinary financial crisis, the Fed enacts various policies to promote business growth and keep the cost of borrowing at bay. One such measure is known as quantitative easing, which refers to the Fed’s purchase of Treasury and mortgage-backed securities, which are bundles of home (and other real estate) loans. In exchange for the securities it buys from financial institutions, the Fed pours the equivalent amount of cash into the market, thereby alleviating monetary shortages. Since March 2020, the Fed has been purchasing on average $120 billion worth of securities a month from the open market.

Quantitative easing has helped maintain a low-interest-rate environment, which provides businesses and individuals more support to engage with lending services and invigorate cash flow in the system.

Why Is the Fed Tapering Now?

In its recent announcement, the FOMC plans to reduce Federal purchases by $15 billion in securities starting in November. Given the current purchase rate of $120 billion per month, it is estimated that quantitative easing will be completely ended by July 2022. However, it is obvious that the economy, among other factors, are far from returning to normality. Why has the Fed decided to pull back on its aid?

A primary reason is growing concerns with inflation. As a result of the emerging Delta variant, global supply chains that have seen prior opportunities for recovery have once again come to a standstill. Consequently, as goods become more scarce, a significant increase in commodity and retail prices looms over the economy. While the implementation of quantitative easing has injected huge amounts of cash into the economy, contributing to lessened borrowing stress, it also decreases the value of the dollar, which then leads to inflationary pressures. This theory is confirmed by the linear relationship between growth of federal assets and the US consumer price index, which is a standard measure of inflation. As shown by the figure below, there is a positive correlation between the Fed purchasing securities (pouring cash into circulation)  and the uptick in prices of various baskets of commodities across the board. 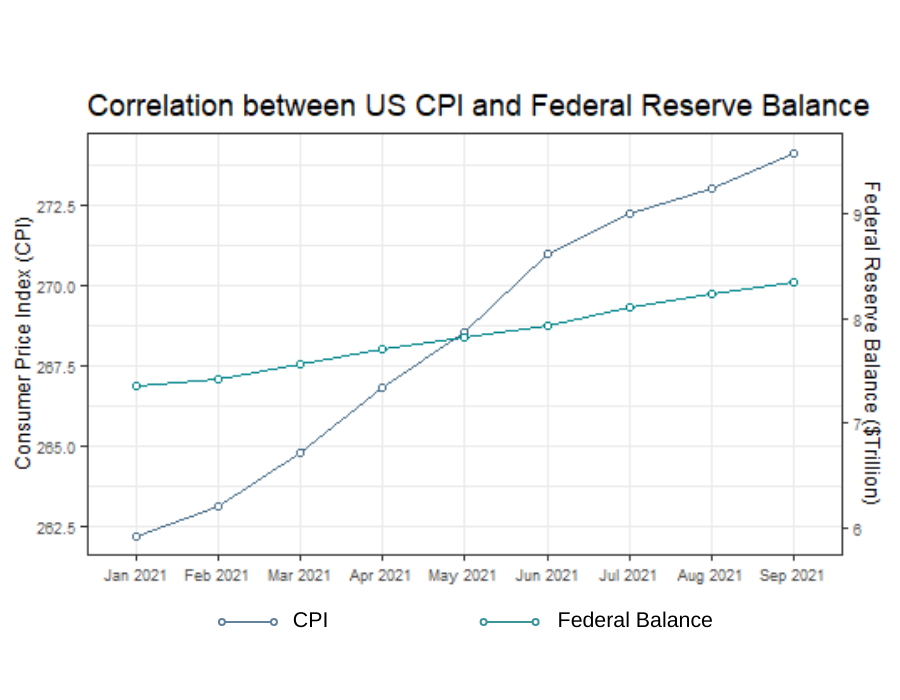 (Data courtesy from the US Bureau of Labor Statistics)

Looking at the status quo, inflation rates have seen a YoY increase of 5.4%, surpassing  the Fed’s target of 2%. Therefore, the Fed enacts the tapering of securities purchases to counteract rising prices. However, as to ease concerns, the Fed also stated that it considers current increase in prices to be transitory – that is, current inflations are no more than a temporary byproduct of the pandemic.

Without the continued support of quantitative easing, what can we say about the economic landscape in the short-term future?

The Economy Will be Fine – For Now

It is not uncommon to think that the economy might head for a sharp plunge as quantitative easing comes to an end. But such a future is very unlikely to happen, given the Fed’s careful implementation of tapering. It is important to recognize that securities purchases will not halt immediately – the Fed is still buying immense amounts of assets, albeit at a gradually lower rate.

Naturally, with tapering comes the worry of rising interest rates: in the past, a common strategy that the Fed employed to adjust for inflation is to increase the cost of borrowing loans and mortgages. These concerns are justified, as raising interest rates in the current environment will destroy the chance of recovery for countless smaller enterprises, which heavily depend on the low borrowing costs to manage expenses during the pandemic.

Immediate changes in interest rates, however, are unlikely due to the Fed’s dovish approach towards tapering and changing monetary policies. The FOMC has stated that the federal funds rate will be kept between 0% – 0.25% until both the labor market and inflation rates have returned to normal. Since employment is directly associated with pandemic recovery, the Fed’s current stance suggests that low-interest environments will continue for the foreseeable future. Nevertheless, speculations regarding rate hikes – or a lack thereof – have only added more volatility to the stock market.

The continuation of low interest rates does not warrant that borrowing will remain as low-cost as before. Since tapering entails reductions in the purchase of mortgaged-backed securities, the real estate market is very sensitive to tapering. In the weeks leading up to the Fed’s November meeting, mortgage rates have noticeably increased. On the other hand, rising mortgage rates may help stabilize housing prices, which have been rampantly climbing for the past months. For the individual consumer, this means that while applying for home loans can become more costly, more opportunities to become homeowners may also appear.

Tapering has been a long-awaited yet nonetheless influential change to the economy. While the Fed aims to conclude the quantitative easing program that has supplied lifeblood to the economy during the pandemic, immediate economic woes are unlikely due to the Fed’s careful, dovish approach in setting target interest rates and implementing monetary policies. One should remain vigilant for opportunities in the housing market, and perhaps capitalize on the low-interest-rate environment while it is still available.