A Short-Lived Boost for Passenger Airlines

BRB Bottomline: To meet the rapid growth in demand from e-commerce sales, logistics companies like FedEx and Amazon have purchased increasing ton-miles of cargo space from passenger airlines. However, as the industry matures, UPS and FedEx have increased their fleet sizes as well. Amazon has even started purchasing their own planes, such as the case with Amazon Air. What happens to the airline industry when companies take logistics into their own hands to minimize their own “empty miles”?

When I pack for a trip, I try to consolidate everything I want to bring into the fewest number of bags physically possible. I don’t like paying hefty baggage fees. I fill my shoes with socks, squeeze out the extra air from my bags inside, and play tetris with all my clothes and souvenirs.

More than money, people value their time. We choose to carry a whole day’s worth of notebooks to classes instead of coming home. We try to choose classes that are physically close together, most preferably close to home. We run errands based on what’s along the way.

Likewise, companies try to fit as much they can into their “suitcases,” doing their best to optimize efficiency. More efficient operations improves asset utilization and turnover, which can increase returns on invested capital and profits. As the logistics industry matures, some of these companies have begun to experiment with taking logistics back into their own hands.

Thinking about a time without Amazon and e-commerce seems unfathomable, yet that was the reality just two decades ago. The boom of e-commerce has led to a boom in transportation and logistics companies.

E-commerce businesses relied heavily upon transportation companies to fulfill millions of online orders. Moreover, demand for expedited shipping has increased these companies’ reliance on airline, railroad, and shipping companies to help them keep up with customer expectations.

Transportation companies have evolved to capture these high demands. Railroad companies began introducing double-stack intermodal rail cars, linked platforms that dip in the center to allow shippers to literally stack cargo containers, which allows them to carry twice the amount of cargo per trip. New companies such as Unisys and IBS are building software products that optimize the packing of cargo shipments and the path of shipment. Moreover, passenger airlines sell excess cargo space to these logistics providers to maximize their own “empty miles”; however, as the demand for cargo space increases, the opportunity cost for airlines to offer complimentary or cheap baggage fees also increases. At the end of 2018, United, JetBlue, Delta, and American Airlines all raised their baggage fees by $5.

Airlines earn revenue in two ways: passenger and freight. They make money by shipping you and your luggage, then selling extra cargo space to other companies. To them, this is free money because they fly those people and their bags regardless.

Airlines, however, operate in a relatively-low barriers to entry business with commodity-like services. In order to keep and attract customers with lower and lower fares, these companies have tried to squeeze by with net margins of less than 5%. It has become crucial for these airline companies to find ancillary revenues to bolster profits. For many of these airlines, the answer has been freight.

Interestingly, even though the stock prices of airlines seem to move up and down in tandem, they each have their nuances. Certain airlines benefit disproportionately from certain market conditions.

For example, tariffs. In March 2018, the Trump administration imposed 10% and 25% tariffs on imported aluminum and steel, respectively. For passenger airlines that mostly fly domestically, volumes for domestic cargo shipments were largely unaffected.  However, international cargo spiked. Between February and March, Delta experienced a spike of 18.3%, United 18.03%, and American Airlines 21.62% in international cargo revenue. Companies and consumers who expected to pay higher costs to purchase goods in the future accelerated purchases before tariffs were said to be effective. Chinese manufacturers front loaded everything from toys, car parts, household appliances, you name it to America before tariffs would take effect.

This spike is likely short-lived. Despite accelerating purchases now, these companies expect to order fewer shipments in the future. Companies like Walmart, Dollar Tree, and Amazon are now cancelling planned shipments from Chinese suppliers, because the rising tariffs no longer make certain imported products profitable anymore 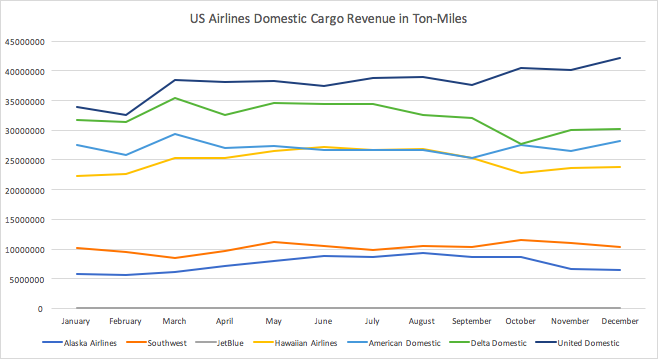 Future Effects of Logistics Companies Buying their Own Planes

Both domestic and international US Airlines have experienced higher demand for cargo space. Since 2015, domestic U.S. airlines have seen cargo ton-miles increase by 16.56% because of increased demand and increased capacity, while international U.S. airline cargo ton-miles only increased by 9.09%. For many international U.S airlines, the majority of cargo revenue comes from international flights. It was 81.17%, 82.41%, and 81.17% for United, Delta, and American Airlines respectively. However, based on IATA’s regional predictions for air freight, it seems that it is plateauing, if not actually declining, which would hurt these airline cargo revenues. 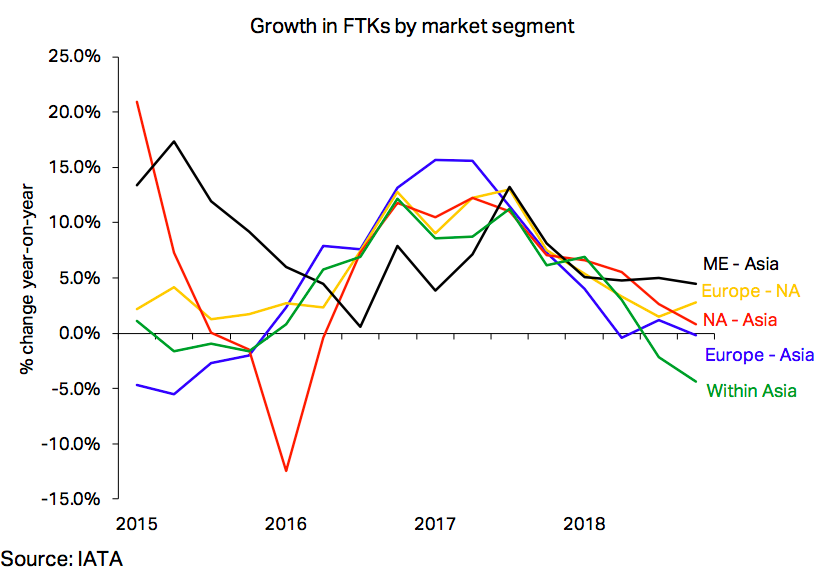 But more importantly, these revenues will be hurt most in the long term as companies wean off airlines for cargo space. Last year, UPS ordered 18 more cargo planes, adding over 9 million pounds of cargo space to their current cargo capacity. FedEx expanded and modernized their fleet by adopting more ATR 72-600F airplanes and purchasing 24 more cargo planes from Boeing. Amazon partnered with plane leasing companies Atlas Air and Air Transport Services Group (ATSG) to build Amazon Air’s fleet to 40 planes. In 2021, Amazon hopes to open a hub in Cincinnati airport in 2021 that can hold 100 planes and hopes to have 200 flights per day.

As more companies wean off airline companies and utilize their own fleets to ship products, airlines will have to find other ways to replace once-bolstered profit margins. These costs may be passed on to customers like you and me. Airlines such as Delta and Southwest have already hiked up air fares this year because of higher fuel costs. Likely, they will charge higher baggage fees and hike up airline tickets to make up for the lost cargo revenue they may experience in the future. With less demand for cargo space, the organization of planes may change too, because they no longer need the extra space for cargo. These planes may be converted to double deckers to increase passenger capacity and minimize their empty miles. Important for investors in international passenger airlines, the profit boost from selling excess freight space on international flights is likely to be short-lived.

** Data from this source: Bureau of Transportation Statistics and IATA**

Passenger airlines, particularly ones that fly internationally, have benefitted from high demand for their cargo space. However, this revenue boost will be temporary. Companies like Amazon, UPS, and FedEx are now beginning to take charge of their own logistics by buying their own aircrafts. If airlines are losing cargo revenue, they will have to find other ways to compensate, which may bring more charges to me and you.